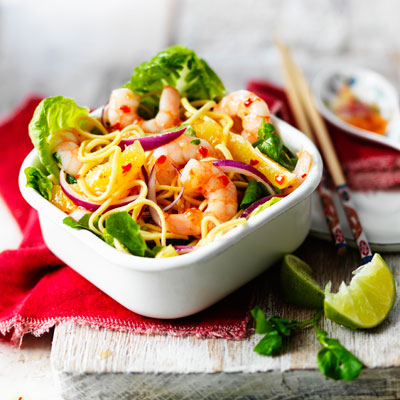 Add 6 Syns if not using Prawns as a Healthy Extra on Green.

For the orange dressing

Make the orange dressing. Put the mustard, vinegar and orange juice in a bowl and whisk together.

Place the peppers under a hot grill until blackened all over, turning occasionally. Put them into a polythene bag of 5 minutes (this makes it easier to remove the skins), then peel them and remove any seeds. Cut the flesh into small confetti-like squares or diamond shapes.

Bring a saucepan of lightly salted water to the boil and add the green beans. Cook, uncovered, for 5 minutes, until just tender but still slightly crisp. Remove with a slotted spoon and cool.

Remove the corn kernels from the corn on the cob and add to the boiling water in the pan with the potatoes. Cook for 3-4 minutes, until just tender, then drain and cool. If wished, you can use a bowl of iced water to cool all the vegetables quickly.

Mix the drained cooked beans, the sweetcorn and potatoes with the peppers and toss lightly in half of the dressing.

Toss the mixed salad leaves with the remaining dressing and arrange them on 4 serving plates. Top with the shelled prawns and vegetable confetti. Serve the salad immediately.

Tip: You can vary the flavour and appearance of this pretty salad without changing the Syns. For a special occasion, instead of using regular shelled prawns substitute some cooked, shelled tiger prawns. A final sprinkling of chopped fresh herbs, such as dill, parsley or chevril, will also add interest.