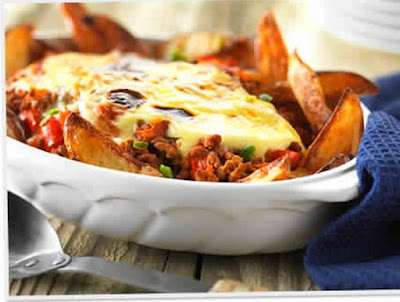 Serves: 2
Ready in: Less than 30 Minutes
Syns per serving:  FREE

Add 6 Syns if not using Primula Light Cheese Spread as a Healthy Extra.

Serve our lightened-up version of nachos with lots of Speed Free Foods and you'll be saying "Arriba, arriba!" on the scales next week.

1.Preheat your oven to 200°C/180°C Fan/Gas 6. Put the wedges on a non-stick baking tray, spray with low-calorie cooking spray and season. Bake for 25 minutes, then turn, spray again and bake for a further 25 minutes until golden.

2. Meanwhile, spray a frying pan with low-calorie cooking spray and place over a medium-high heat. Add the mince and stir-fry for 10 minutes, then add the onion and cook for 5-6 minutes, or until softened. Add the pepper and cook for 2-3 minutes, then stir in the canned tomatoes.

3. Sprinkle in the cumin, fajita seasoning, paprika and a few twists of black pepper. Cook for 10-15 minutes, until most of the liquid has evaporated. Stir in the fresh tomatoes. Remove from the heat.

4.Preheat your grill to high. Tip the wedges into an ovenproof dish, spoon over the mince and squeeze over the Primula Light Cheese. Sprinkle with the chillies, if using, and grill for 8-10 minutes, or until the cheese starts to brown. Divide between 2 plates and serve.